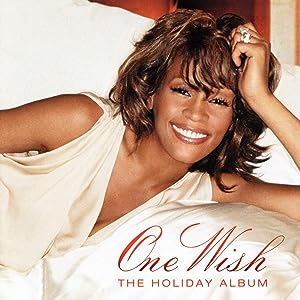 One Wish: The Holiday Album

Initial thoughts: It’s Whitney Houston. The Whitney Houston. Arguably the best voice to grace this earth, maybe even equal to the current living legend, Celine Dion. In fact, dare I say that both Whitney and Celine have the most powerful emotive voices, ever?

Reason to listen: It’s Whitney, enough said! If you don’t know who Whitney Houston is, then you better educate yourself now, and stop reading until you realise that you’ve just missed out on knowing one of music history’s most impactful music artists of the modern era.

Reason to skip: Should I even answer this question, no really, should I? if you’re even contemplating any reason to skip, then maybe you shouldn’t even call yourself an enjoyer of music, period!

No. of originals: 2- a Freddy Jackson cover (One Wish) and a song originally from The Preacher’s Wife Soundtrack (Who Would Imagine a King)

Does it have heart?: Immensely so! This is the same artist who has recorded the powerful songs ‘When You Believe’, ‘I Have Nothing’, ‘I Will Always Love You’, ‘Step By Step’, ‘Greatest Love Of All’ and ‘I Wanna Dance With Somebody’, to name a few. Need is say more? Perhaps on par with These are Special Times with the most iconic Christmas albums by any female artist in the history of Christmas music, period. And knowing all that…yes it has heart. But even if you think that this album doesn’t have heart, that is not reason enough to sleep on One Wish: The Holiday Album. Whitney is a legend, and this album and it’s immense heart, will continue to live on, as the decades roll along!

Does it have a Christmas-y atmosphere?: Yes, yes and another one for good measure, yes! Whitney’s trademark voice, coupled with strings and piano, there is a very good chance that there’s nothing like this album in the whole 2000s decade!

Uniqueness?: With Whitney’s voice? Definitely unique. I shouldn’t really need to answer this question, for anyone to buy this album or not. Yes, it’s unique, and yes, it’s a no brainer to buy, yes, buy, this album!

Christmas message: If only for ‘O Holy Night’, ‘Who Would Imagine a King’ and ‘Little Drummer Boy’ alone, this album is littered with the message of Christmas- hope in our Saviour Christ Jesus, and the joy and peace that comes from knowing that Christ’s birth will lead to the saving of mankind- past, present and future. One of the most biblically-sound Christmas albums by a mainstream artist, ever!

Closing thoughts: Only just one- buy this album at once. No if’s or buts. Just buy it. You’ll thank me later!

3 songs to listen to: One Wish, Joy to the World, O Holy Night

Yes/no; why/why not?: Yes. Why? It’s Whitney Houston. No other reason. Buy it. Listen to it. And appreciate an artist that was taken from this earth all too soon. One of the greatest artists that has ever given music to us all. Enough said!