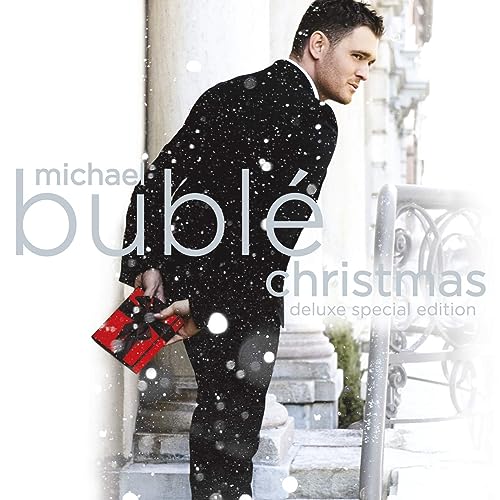 Initial thoughts: Did Frank Sinatra time travel to the 21st century? Cause that’s what it sounds like to me! In all seriousness, Michael’s enthusiasm and signature jazz tunes are evident to the max here, which is now expected, and part and parcel of who Michael is as an singer.

Reason to listen: Who doesn’t love Michael Bublé’s music? Even if you don’t there’s still a part of you that will tap your toes and nod your head. And that’ll be the same with this holiday release, I can guarantee it! Especially with the surprisingly enjoyable version of Mariah Carey’s “All I Want For Christmas Is You”. Michael worms our way into our hearts and emotions with every single one of his studio albums, and this project is no different!

Reason to buy: A positive, happy-go-lucky Christmas album that sounds very, very Christmas-y? Everybody let’s go camping outside JB Hi-Fi or Walmart for Christmas shall we? Because when will we find a cheerier Christmas album?

Reason to skip: Not everyone is a fan of the big band genre- so if Michael’s voice is grating and hard to be inspired by, then unfortunately this album won’t be for you.

No. of carols: A whopping and somewhat inconceivable 19!

No. of originals: 2 (inclusive of the 8 second ‘Michael’s Christmas Greeting’). Yet that’s to be expected, as Michael is more of a performer and an entertainer than a songwriter.

Does it have heart?: Michael certainly gives his all 100% and then some more! Yet with him only recording covers (and the lone original Cold December Night being an upbeat song promoting family/tradition), there’s not a song on this album that makes me emotional and makes me cry (like the several original songs in Matthew West’s The Heart Of Christmas)! It’s also hard to measure or decipher as to whether Michael is meaning what he is singing. I’d like to give the benefit of the doubt, but I just don’t know.

Uniqueness?: Ummm, I don’t know? It’s Michael Bublé, it’s big band, it’s jazz- and Michael does have a unique sound. I’m just not sure that the first word that comes into my brain is ‘unique’ when I hear this album. It’s definitely an interesting experience, that’s for sure!

Christmas message: There’s only one lone carol in “Silent Night”, the rest are holiday classics and seasonal favourites. The only message here is one of family and giving each other presents! This album is purely created for those who celebrate Christmas for the family and cultural aspect- for the non-religious. It’s a shame because I reckon Michael singing “Joy To The World” or “O Come All Ye Faithful” or “O Holy Night” would sound pretty epic!

Closing thoughts: For some strange reason, the Christmas season is synonymous with Michael Bublé’s Christmas. But let me tell you that for me, after listening to this ginormous track list… I’ve forgotten the first song and its musical structure. Is it possible that Michael’s album is too ambitious and bites off more than it can chew? Quite possibly.

Yes/no; why/why not?: This album is perfect as background music while you’re wrapping presents or eating Christmas dinner. But for something deep and meaningful and for reflection upon Jesus’ birth? Sorry Michael but to me Christmas isn’t that synonymous with Christmas and Jesus’ birth! The only instance that I would say buy the album is if it’s cheap or on sale!