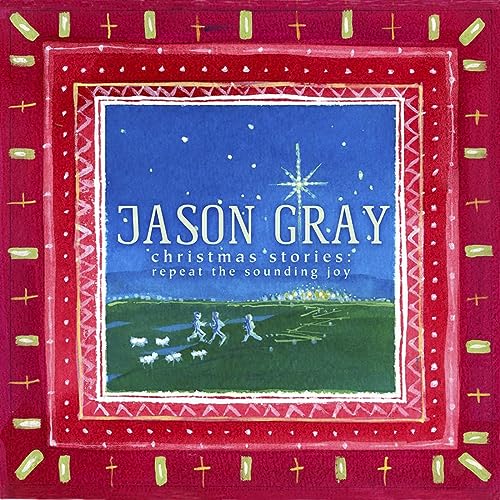 Initial thoughts: Jason Gray has never ceased to astound me. With a speech ‘impediment’ throughout his whole life, this calm, bold and sometimes confronting singer-songwriter has stretched the boundaries of CCM music lyrically and musically with his poignant melodies with many different musical arrangements, as his ‘stutter’ has given him a different outlook on life, and a reason to sing of God’s goodness, and all He has done. In 2012 Jason unveiled his first Christmas album Christmas Stories: Repeat The Sounding Joy, with offerings and renditions of a few Christmas carols, however the bulk of the album is littered with original tracks written by Jason, as well as songwriters Cason Cooley, Joel Hanson, Nichole Nordeman, Randall Goodgame, and Andy Gullahorn. For me I instantly resonated with these tracks, and even 8 years later, this album is still one of the few that I revisit with still sustained enjoyment.

Reason to listen: At first glance, I reckon most of us would bypass this album because of the fact that there are more ‘obscure’ songs than ‘popular’ songs. And 2 of the 4 popular Christmas songs are only 1 minute in length. However Jason is a master songwriter- and if you give this album one chance, I guarantee it that you’ll become a fan of Jason, and that you will be forever changed by the Christmas story- by the story of Jesus Christ who was born in a manger for the world.

Reason to buy: They say that September and October is too early to start listening to Christmas music. But as I spun these 13 tracks of Jason’s over and over again, I instantly fell in love with the craftsmanship and the personal connection of these songs in relation to what each of the Bible characters around the time of the birth of Jesus must have been feeling. Trying to put himself into many people’s shoes, to grasp a handle over what they were thinking; Jason has masterfully handmade instant classics, and this album is a must-buy for all of you and each of you. No questions asked.

Reason to skip: You must be joking right? Christmas Stories: Repeat The Sounding Joy is not just a holiday album- it’s a Christmas worship experience like no other than will enhance our relationship with God each time we listen!

No of guest artists: None. This works in Jason’s favour, as any guest vocalist would detract from the powerful and poignant lyrics that Jason has delivered to us.

Does it have heart?: Extremely so. Each original song is sung from the point of view of a central Christmas character (the innkeeper, the shepherds, Mary, Joseph, the wise men); and so as Jason delves into the possible feelings each person may have felt around the time of the birth- so that we can empathise with these people… well I reckon there’s no better way for us to relate to these songs than to be in their shoes for a bit. With raw emotion, honesty and vulnerability oozing throughout… what more ‘heart’ do you need?

Uniqueness?: Very much so. 9 out of 13 tracks being original are a fair chunk, however with Jason’s song-writing ability and honest emotional vocals; this storytelling of the Christmas narrative with several songs seen through the eyes of the key characters (Joseph, the shepherds, the wisemen, the innkeeper, Mary) is quite different, and is a breath of fresh air for me!

Christmas message: See above- what better way to go through the Christmas story than to create all-original Christmas songs for each aspect and each key player in the Christmas narrative?

Closing thoughts: As a songwriter and as a storyteller, I believe that Jason has executed his job with composure and professionalism; and with a kind of assurance that is commendable and praise worthy! And who’d have thought after there only being 4 traditional carols?

3 songs to listen to: Christmas Is Coming, Rest, Gloria

Yes/no; why/why not?: A resounding yes, and then a declaratory yes, and then a commanding yes. Another yes for good measure. As I’ve mentioned before in previous reviews, Jason Gray is one of my favourite artists of all time. The fact that he has a stutter and a remarkable story of grace and redemption leading him to music; is all the more reason why he is inspiring. Jason’s albums have always told stories from the depths of his soul, and have always included brutal honesty and real emotions. I have especially loved the trio of later albums Jason has released (A Way To See In The Dark, Love Will Have The Final Word and Where The Light Gets In), while the upcoming Order Disorder Reorder is one of my favourite albums of the year (Jon has reviewed it here!). And what to make of Christmas Stories: Repeat The Sounding Joy? Sheer brilliance and near-perfection is what that project is. So… buy the album. You’ll thank me later!