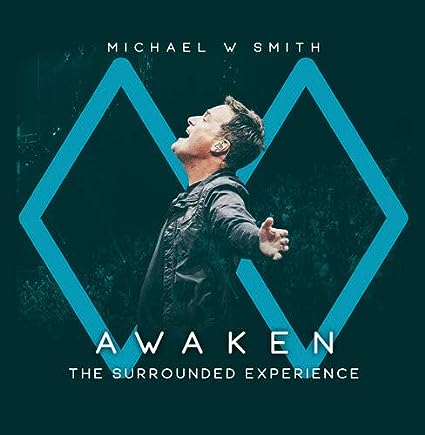 Everyone knows Michael W. Smith, or at least, everyone should. No seriously, if you haven’t heard of Michael W. Smith by now, regardless of whether you listen to Christian music or not, you’ve been living underneath a rock. I’m sure anyone who’s everyone and everyone who loves music, period, has heard of Michael and his music at one point or another in their lives. And for those who don’t know Michael and his music- just check out google, but here’s a few gems of goodness for those who may not know this artist who I reckon is one of the most influential artists within the realm of Christian music- Michael is a renown worship leader, a multi-Platinum, three-time Grammy Award winning artist, best-selling author and acclaimed actor. He has been previously on both Sparrow Records and Reunion Records, has released chart-topping songs like ‘Place in This World’, ‘Love Me Good’, ‘Live the Life’, ‘Friends’, ‘This is Your Time’, ‘Healing Rain’, ‘Give It Away’, ‘I’ll Lead You Home’ and ‘Come to the Cross’ to name a few (there are many, many more); as well as covering ‘Above All’, a song that wasn’t written by him (it was written by Paul Baloche), but from here on end, will always be attributed to him. He has been in and around the music business for a long time, releasing his debut album in the early 1980s. Now it’s 2019, and we saw indeed a rebirth of Michael of sorts, as he released not only one or two, but three album releases throughout the year of 2018- one a pop release in A Million Lights, two a worship live album full of original songs and covers in Surrounded, and three, a lullaby album, aptly titled Lullaby. All of which have released independently. All of which are a reminder that someone as seasoned and a veteran as Michael W. Smith can still deliver awe-inspiring and out-of-the-box album releases, even after all of this time.

Now in 2019, Michael is readying for yet another album release, this time, it’s a worship album full of songs from his Surrounded album, some new songs, a cover of a CeCe Winans track (which features CeCe Winans as well) and a whole lotta old-school worship songs present on this project as well. As said by Michael himself, ‘…The Surrounded event at Bridgestone Arena was an amazing night of music and Worship.  The song ‘Waymaker’ stands out as one of the highlights of the entire evening. It’s a powerful lyric and is delivered with incredible passion by Vanessa Campagna and Madelyn Berry – two incredible singers… The night was beautiful. I remember thinking, ‘This is what Heaven will look like.’ A picture of unity, with all colors, ethnicities, denominations and ages joined together in worship. I’m still hearing reports of lives changed, commitments deepened and people empowered in a new way. We may each have different stories, skin and songs, but we all share His same Spirit…’ As shown by this above quote, it seemed like the night that was a worship event, used as a live recording for the album, was soulful and heartfelt, emotive and encouraging, even life-changing for some people who attended the worship concert. What has resulted is 13 songs that are familiar and sung with complete Michael W. Smith flair and familiarity, as these songs harken back to not only Surrounded but throughout all of Michael’s career, taking some of his career worship song hits, and other songs that are popular, that he may not have written, but has decided to include on the album anyway, because of its popularity in the world today.

Which brings me to this review. Nothing against Michael. Nothing against the passion of each of the songs on the album. In fact, the new song ‘Waymaker’ (the only ‘new’ song on the album, all the others have been attributed to other Michael W. Smith albums in the past, or attributed to other artists entirely!) featuring Vanessa Campagna and Madelyn Berry, is one of my favourite worship songs I’ve heard since songs from Phil Wickham’s Living Hope from last year. And yet, for me this new album from Michael doesn’t really feel necessary. Nothing against Michael or the richness and necessity of that particular night. It’s just that to release an album like Awaken: The Surrounded Experience, so closely after Surrounded last year, can seem like overkill. There, I said it. The album being released this week is in fact overkill. The songs I’ve heard before, either on Surrounded or other artists. The arrangements are not quite different compared to that of Surrounded. And even the songs that are included that weren’t from Surrounded but rather older songs like ‘Healing Rain’, ‘Agnus Dei’ and ‘Let It Rain’, are not the full versions. It’s just a chorus here and there, stretched out and sung repeatedly so as to seem like the whole song is sung when looking at the song length, when in reality, it’s only a refrain sung to death. Nothing wrong with that, not at all, I’m sure God has moved and moved powerfully, even if a refrain is sung continuously…just look at ‘Surrounded’- just two refrains sung over and over, and we can understand that the power of a song isn’t lost if it isn’t done to the structure we believe to be right. But, let me say that Michael is so much more than a worship artist- he’s a pop artist, an artist with quite a few mainstream songs, and yet, this new album from Michael seems to reduce Michael, at 61 years young, to a worship artist. There’s nothing wrong if that is the direction that Michael wants to travel towards, it’s just that the Michael W. Smith of old, the artist that created such great albums like Live the Life, Healing Rain, Stand, Change Your World, Wonder, This is Your Time, and I’ll Lead You Home (to name a few) seems to have disappeared, for whatever reason, and now we’re left with an album full of covers, that is really, really, just a marketing ploy rather than an album that showcases Michael’s songwriting ability. Which is really a shame, because I don’t like writing negative reviews, yet sadly, this album is indeed one!

If you are a fan of Michael’s worship music, then this album releasing this coming Friday, as unnecessary as it is, will still be enjoyed by a few who really, really love worship music. And for those, like myself, who want a bit of creativity from Michael and see him harken back to the days of Wonder, Healing Rain, or even arguably his most iconic album (for me personally) Live the Life, then this album doesn’t instill any confidence that that is on his radar in the near future! Nevertheless, Michael still impacts a generation even now with his music, and as much as it unsettles me to say it, if Michael continues to drop albums with just cover music, then his impact and relevance in today’s music industry will still be valid, be it baffling as it may. Michael’s songwriting is not on display on this album (except for ‘Waymaker’). Nevertheless, Michael’s passion to lead people into a moment of worship need not be denied. Standouts are definitely ‘Waymaker’ (of which he doesn’t really sing, just backing vocals and piano), ‘Reckless Love’ (because of it’s popularity and reach) and ‘Agnus Dei’ of course, because…well, it’s ‘Agnus Dei’, need I say more? The album releases on Friday, and so, for anyone who loves modern day worship, then this album is definitely for you. For the rest of us, let us eagerly await whatever Michael has in store for us next, whenever that may be!