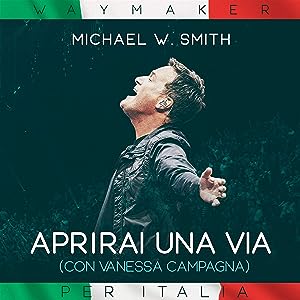 Michael W. Smith needs no introduction. Actually, this song, ‘Way Maker’, that has basically circled the globe over the past year or so, needs no introduction. The song is a powerful anthem, and was actually first recorded in 2015 by Nigerian worship leader/artist/pastor Sinach, and now in 2020, the rest is history- the song actually blew up in popularity when Michael W. Smith recorded his own version of the song on Awaken: The Surrounded Experience, way back in early 2019- then other artists followed suit- Leeland’s version of the track was on their most recent live album Better Word, while both Passion and Mandisa also contributed their own renditions of the song earlier on during 2020. Now here we are in April 2020, and we see Michael release another rendition of the song, this time in Italian, with longtime backing singer and vocalist, Vanessa Campagna singing in Italian too.

The song itself I’m sure is pretty self-explanitory- we as a site have reviewed the song as part of Awaken, as well as the song being reviewed on the site by Mandisa, and you can see both these reviews here and here. So for me to basically regurgitate the review of ‘Way Maker’, here in this review, can seem a little redundant. By now, if you love CCM like me, you would’ve heard ‘Way Maker’ the song- by either Michael, Mandisa, Passion or Leeland. Now in April, the new rendition is unveiled, and for Michael, himself, it’s a special project. Below is both Michael and Vanessa showing us their own hearts behind this rendition, and how they hope people can be impacted by a song, in effect, by America, and for Italy: ‘…after seeing the turmoil in the world and especially the devastation in Italy, we wanted to record this version of ‘Waymaker.’ It is such a special song that moves people and brings them to a very special place, but most importantly it brings them hope…’ (Michael W. Smith) Vanessa, of Italian descent herself, also felt inspired to undertake this project as well- lending her voice to the same parts as she sung on the English version of ‘Way Maker’- ‘…when I saw the video of everyone singing from their balconies in Italy, I was moved to tears. It was the most heart-warming thing I have seen in a long time. I have a lot of family over there, so that hit close to home with me. I thought, what better way to send a message of hope, than the words and music to ‘Waymaker’ in their language. I love you, Italy! Keep the faith, stay strong and keep singing…’

It is in these two quotes above that I see the personal stories behind such a powerful song- making the song even more impactful and heartfelt. If there was a WOW Hits 2021, then this song would’ve been a shoe-in right away. Alas, maybe on Sound of Hits 2021– if that album release is a series and not just a one-off? ‘Way Maker’ is the song of the last year, and a song that certainly brings healing and a sense of certainty of who we are singing to and the authority of this God we serve- ‘Way Maker’ most certainly will bring us comfort and healing throughout a time as this, and a certain repeat on my Spotify playlists for weeks and months to come. Well done Michael for such a powerful song, one that’s going to become people’s go-to song for introspection and perspective as the weeks and months continue to roll on.