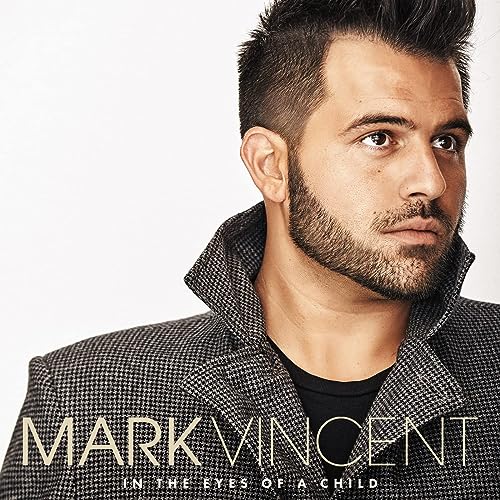 Mark Vincent– In The Eyes Of A Child (Amazon mp3/iTunes)

There’s something about music from your home country. Sure, if you live in any country other than the U.S.; you might find American music catchy, powerful, compelling, inspiring, encouraging and vulnerable, even. However, I’m of the belief that nothing can really hold a candle to music from artists residing in the country you identify as your own home country. And for me, that particular country is Australia. Artists like Guy Sebastian, Delta Goodrem, The McClymonts, Tina Arena, Vanessa Amorosi, Missy Higgins, Dami Im, Natalie Imbruglia, Kylie Minogue, Rebecca St. James, Newsboys, for KING & COUNTRY, Keith Urban, John Farnham, Anthony Callea, The Veronicas, Jessica Mauboy, Conrad Sewell, Marina Prior… the list goes on and on and on. All of these artists are artists that have resonated with me at one point or another within the last few years. I don’t know how to explain it, but there’s something extra special about these artists that draw me closer to God all the more. Call it ‘God using these artists’ or whatever you want to call it; but I have found that I have resonated more with Australian artists, than any other artist… period!

And now that I’ve made you all aware of my broad musical preferences; let us be introduced to another Australian artist- one that is moving, honest, thought-provoking, and just crazily awesome! Australian tenor Mark Vincent won Australia’s Got Talent in 2009, and was subsequently signed to Sony Music Australia. He has recorded many albums since (see his Wikipedia!); and though he isn’t that popular on a global scale, his voice is out of this world. Like at Josh Groban levels of awesome. And as we marvel and awe and wonder at Mark’s power and reach in his voice; now’s the time for me to gloss over Mark’s latest album In The Eyes Of A Child, which released this past week. I myself haven’t been that across Mark’s discography, and I haven’t fully listened to his songs. Just enough to know that he is a once in a generation artist. Globally he isn’t that influential. However, with this album, hopefully he will be within the coming years.

A quick glance throughout Mark’s discography reveals to us many covers that Mark has recorded in the past. Like Josh Groban, Mark can be classified as a ‘covers guy’. Like Josh as well, Mark is probably the kind of guy who records maybe half an album full of original tunes- and that has worked for him over the years. He’s kind of like Michael Buble but in the opera/Broadway musical space in Australia. So, it’s no surprise here to find that most of this latest album In The Eyes Of A Child is full of covers. Like 100% full of covers. And that… isn’t that bad- as the focus is fully on Mark’s otherworldly angelic voice. The title track opens the album; and is a stirring piano ballad originally recorded by Air Supply on their 1987 Christmas album. A haunting and thought-provoking melody about looking to the eyes of children for meaning and purpose: ‘…in the eyes of a child there is joy, there is laughter, there is hope, there is trust, a chance to shape the future, for the lessons of life, there is no better teacher than the look in the eyes of a child…’; the melody speaks in depth about the innocence and the naivety of children. And as Mark eloquently and fervently relays to us all that we all need to learn to slow down and be more like children in order to have a satisfying and fulfilling life, I am drawn to Matthew 18:2-4, where Jesus invites us to be more like children overall. As an opener, this track is full of heart and soul- and kudos needs to be given to Mark who covers this track beautifully and to perfection!

The rest of the 11 tracks paints an album that feels like a warm hug and like a best friend, or like each of us sipping a warm drink of hot chocolate. It’s familiar and full of life and full of inspiration. “Hero”, originally by Mariah Carey, and one of the biggest songs of the 90’s, is recorded with bountiful expression and passion by Mark. A song that implores each of us that we can be our own heroes and that inside each of us is someone who can be bold and fearless in everything we do, it’s given the ‘opera treatment’ (and to me, this inspirational track really works when Mark sings it his own way!); while the iconic and legendary “Make Them Hear You” (from the 1996 musical Ragtime) speaks about the power of words and of persuasion, with Mark confidently declaring through the persona ‘…your sword could be a sermon or the power of the pen, teach every child to raise his voice and then my brothers, then, will justice be demanded by ten million righteous men, make them hear you…’. “Love Of My Life” (Queen), “Music” (John Miles) and “The Power Of Love” (Celine Dion) follow next- and each raise the bar for Mark vocally to staggering new heights. Particularly “Music”, which stands tall at nearly 6 minutes, Mark delivers in every aspect; and these three tracks alone have made me a fan of his… for probably life!

“Smile”, the timeless classic from Charlie Chaplin (and later on Nat King Cole), is covered here majestically from Mark; and this song in particular is probably one of the only songs from way, way back in the day that resonates with me. As Mark encourages us to smile and to look on the bright side of life; this melody is exactly what we need for the uncertain times of Omicron and the Russia-Ukraine war. “Have You Ever Really Loved A Woman?”, originally recorded by Bryan Adams, inspires us all to really know ourselves inside and out before we contemplate pursuing a romantic relationship with someone we love; while the passionate, vibrant, eclectic and spine-tingling “Il Mondo” (“The World”) is an Italian love song originally by Jimmy Fontana, with Mark seamlessly and effortlessly relaying the passion and the raw message of love and loss in the 1965 classic.

“A Time For Us”, the love theme from Romeo and Juliet, was originally recorded by Andy Williams, and has Mark powerfully and gracefully reiterating the true essence of love despite the odds, as he beautifully sings out ‘…and with our love through tears and thorns, we will endure as we pass surely through every storm, a time for us, someday there’ll be, a new world, a world of shining hope for you and me, a time for us at last to see, a life worthwhile for you and me…’. The penultimate melody is Andrea Bocelli’s regal and magnificent “Canto Della Terra”, another love song at its core, with Mark expressing his unending love for his partner or significant other; while In The Eyes Of A Child ends with the album standout “To Where You Are”. Originally recorded by Josh Groban, Mark makes this iconic ballad his own, as he grandly and boldly declares that a friend or a family member or another loved one is watching him from above in heaven. An emotional tear-jerker, Mark eloquently moves us to tears, and encourages us to spend as much time as we can with our family and friends- as we don’t know how much time we have left on this Earth.

Mark Vincent’s In The Eyes Of A Child is simply magnificent. Superb. Wonderful. Fantastic. Moving and inspiring on every level. Each cover is beautifully crafted and tells a story that is riveting from first note to last line sung. No matter which way you slice it, this covers album inspires us all to the core, and should be on everyone’s list to listen to before the year ends. And… that’s all I need to say. Except to listen to Mark Vincent’s discography is you haven’t already! Well done Mark, I can’t wait to hear what’s in store for you next!

3 songs to listen to: Music, The Power Of Love, To Where You Are