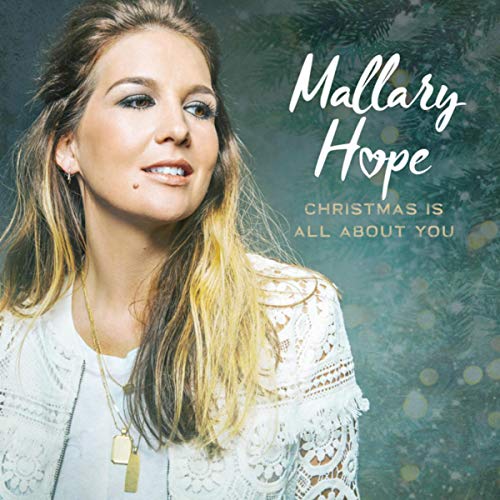 Mallary Hope– Christmas Is All About You EP (Amazon mp3/iTunes)

“…I love Christmas, and it feels especially exciting for our family this year as we get ready to grow, waiting on the arrival of our third little one. But with so much going on, it can be easy to lose sight of why we celebrate. This song is a reminder to me as much as it is to my fans that Jesus is the reason – Christmas is all about Him…” With a powerful voice akin to artists like Carrie Underwood, Karyn Williams, and Hillary Scott, singer/songwriter and country artist Mallary Hope wowed us all back early last year, with the smash hit radio single “NOW”, her first to be marketed to Christian radio. Having a strong faith herself, Mallary’s passion for Jesus was evident even then- yet it was strange hearing a country artist deliver such a compelling and inspiring track about Jesus. A short album (or long EP!) followed- her self titled debut, and now we are blessed to hear Mallary’s first Christmas release. Christmas Is All About You is a 3 song EP, and even though two of the songs – “Just A Baby” and “Mary Did You Know?” released last year (and was reviewed on this site right here!), the re-release with a brand new song added; is nonetheless still hopeful and impactful in a season full of shopping and celebrating without much thought into the deeper meaning.

With the last two songs on the EP already being reviewed by Jon last year (you can all read that review instead of me re-hashing my thoughts which will be very similar to Jon’s thoughts!), let me dive into the lone ‘unfamiliar’ song on the album. The title track is as Christmas-y as they come, with the melody containing bells, whistles and a piano prominent atmosphere, as Mallary imparts to us one of the most basic but at times forgotten truths about Christmas- that it’s all about him. Too much and too often are we blinded by the hustle and the bustle, and wrapped up in the commotion of family and turkey and presents and Santa and busy schedules; that we stop and pause and reflect upon the true reason for the season. I reckon Mallary puts it best in the chorus that ‘…all the lights can’t compare to how bright Your love lights up the world, all the presents ’round the tree aren’t as perfect and priceless as the gift You are to me, help me remember as December rushes through, a baby in a manger brings the truth- Christmas is all about You…’; and I firmly believe that this chorus sums up the heart of Christmas and I don’t need to say any more about this Holy Spirit-anointed melody. I’ll just let Mallary sing for herself and sing beautifully!

Along with the other two recognised tracks (of which “Just A Baby” is still one of my favourite original Christmas melodies ever!), Mallary Hope’s new EP is a bit short (maybe it’s a precursor to a full length Christmas album releasing in the future!), yet with “Me” debuting on Christian radio early in January 2019, these insightful and prayerful holiday tunes are enough to tie us over until then, as we eagerly anticipate Mallary’s new studio album releasing sometime in 2019. With Mallary on fire for Jesus, it is unknown whether she will continue to make music in the CCM industry or in the country genre- but whatever the case, let us support her either way as she nonetheless makes Jesus’ name famous! So what are you waiting for? We know that Christmas is all about Jesus, so let’s here Mallary sing about it- and we can sing along too!