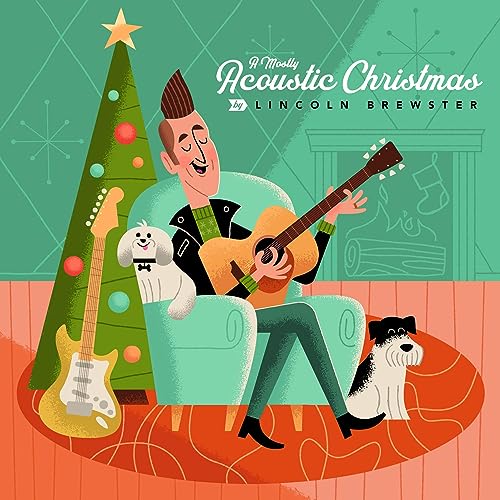 Lincoln Brewster is one of my favourite worship leaders, and worship artists. Maybe within the top 5 ever. There. Period. Maybe up with others like Paul Baloche, Tim Hughes, Meredith Andrews and Phil Wickham to round out the top 5 favourite worship artists of all time (solo artists that is, with worship band Delirious? being my favourite worship band ever!)… so sorry Chris Tomlin, Lincoln just nudges you out… no seriously, Lincoln’s worship is certainly underrated. Possibly one of the most energetic and enthusiastic guitarists around ever, surpassed only by Stu G., guitarist of Delirious? Lincoln’s passion for worship is shown in any album he records. And while Lincoln’s fresh off the heels of his brand-new worship album God of the Impossible only released last year (and then prior to that, it was 4 years since his pop-electronic-worship album Oxygen – and four years prior since the 2010 album Real Life), Lincoln’s passion for worship and his heart to create and present to us heartfelt songs that stir up a passion for worship, has never wavered. Known for his church and radio favourites, from ‘Today is the Day’, ‘There is Power’ and ‘God You Reign’, to ‘Let the Praises Ring’, ‘Sinking Ships’, ‘Oxygen’, ‘Made New’ and ‘Majestic’; much of Lincoln’s music catalogue are both catchy and heartfelt, alongside it being grounded in biblical scripture and the Word of God. And while I reckon that is what all music for the church should be, grounded in the Word, sometimes we get some songs that are just a little bit more theologically firm than others.

Not to have an attack on worship music in general, it’s just that Lincoln and his music has always been special for myself and my own spiritual growth. Since walking away from a mainstream music career when he was young in his twenties, Lincoln has since proven to be a reliable worship artist, as we see time and time again, songs that tug at the heart and challenge the listener in their own walk with Christ. Much of his new 2018 album God of the Impossible asserts and affirms much of this belief. Here we are in 2019, and Lincoln has unveiled to us quite possibly one of the most emotive and heartfelt set of Christmas songs in a long, long time- another Christmas album in A Mostly Acoustic Christmas. And yes, Lincoln did release a Christmas album called Joy to the World way back in 2012, but here in 2019, his new Christmas album release is something that is as unique as it is needed in the society of today. A Mostly Acoustic Christmas sees Lincoln have all his trademarks placed in these songs for the world to see- his guitar skill throughout every song, though much of this album as a whole is more acoustically driven compared to his previous Christmas album. Nevertheless, this album, complete with a few instrumental songs, new Christmas carols and carols redone from Joy to the World– is a selection that is deemed worthy of a listen, at least once. Standing at 11 songs, much of the songs are re-imagined- often with omitting the hard-hitting guitar-drum sounds and actively replacing it with brass instruments and a blues atmosphere. While in a blunt sense, this new album from Lincoln hasn’t really brought much to the table of unique Christmas albums; what I will say is this- that this new album delivers a side of Lincoln that is not often seen- shown to do a lot of flambouyant guitar playing, this album in particular allows Lincoln to step back and allow the acoustic nature of the songs to shine through.

It’s hard to review an album when a lot of it has already been ‘reviewed’ through other means. With much of this acoustic album being already recorded on various other albumsi in the past, I’ll just make note to a few arrangement changes, as Lincoln nevertheless delivers songs he’s familiar with in albums gone past, albeit redone a little differently. ‘Joy to the World’, ‘Angels We Have Heard on High’, ‘O Come, O Come Emmanuel’ and ‘Little Drummer’s Boy’ are all re-recorded in an acoustical/jazz/blues format compared to their rousing electric guitar driven versions on Joy to the World, and for me personally, I’ve thoroughly enjoyed the newer ‘stripped’ down versions of carols and fan classics. While the new version of ‘Little Drummer Boy’ doesn’t feature KJ-52 as it did on the album version 7 years ago, what it does feature now is a very impressive electric guitar solo as Lincoln continues to showcase his electric guitar prowess that continues to make me impressed at how versatile his musical skills are. ‘Jingle Bells’ is in fact one of the highlights out of the new recordings for this album, as Lincoln brings together holiday favourites ‘Jingle Bells’, ‘Frosty the Snowman’ and ‘Rudolph the Red Nosed Reindeer’ together to form a medley, complete with accordions, synthesizer keyboards as well as saxophones and acoustic guitars to bring to the fore a jazz genre that fits quite well on Lincoln, and a genre sadly not explored enough within this CCM realm of music. ‘The Christmas Song’, covered way too many times by way too many artists, stands at 2:41 and Lincoln doesn’t deviate, if at all, compared to the version that we know in our heads (the added violin and lighter instruments makes us reflect upon the lyrics all the more!), while another newly recorded song ‘I’ll Be Home for Christmas’ (yet another song that has been recorded again and again by many artists over the years, much to my chagrin and expectation that people would record another song that is lesser known and much more lively!) is nevertheless passionately recorded by Lincoln, but alas, the song is far too long, and for me, I’ve never really gotten into that song in particular anyway, by any artist. ‘O Come All Ye Faithful’ is the last remaining song on the album (aside from all the instrumental songs which I will discuss a little later!), as Lincoln brings to us yet another version of a song that is quite possibly one of my favourite carols, ever! One that is very worshipful (alongside ‘O Holy Night’), ‘O Come All Ye Faithful’ features light acoustical techniques that Lincoln has employed that has made this song into a slightly folksy/country sound, which isn’t quite bad at all.

And so here we are with the remaining songs- the instrumentals, and while for me I haven’t come across the song ‘Linus and Lucy’ (because I never really was an avid fan of Charlie Brown back in the day), nor am I familiar with an instrumental song called ‘Spera In Deo’ is at all (ironically, ‘Spera In Deo’ by translation into English is called ‘hope in God’ and Lincoln’s the only artist who’s recorded an instrumental track titled this…hence, this instrumental isn’t a cover but rather an individually written tune!); ‘Miraculum’ is and always will be one of my favourite Christmas songs by Lincoln, period. So much so that below, I’ll quote verbatum, what I said about the song when I was writing for IndieVisionMusic.com- the same can be said about this new acoustical rendition of ‘Miraculum’ as well- ‘…placing all his musical experience into one awesome track in ‘Miraculum’, this instrumental melody standing at a long 6:20 in length incorporates carols from ‘God Rest Ye Merry Gentlemen’, ‘O Come, O Come Emmanuel’ and ‘Carol Of the Bells’ amongst more to produce a well-polished and anthemic medley of songs worthy of playing in the orchestra. With no words, this tune is a pure example of worship, as even with no words, Lincoln is able to translate a worshipful presence that is sure to touch people who may not have heard about Christ, or not have been that receptive to Him in the past… How I long for this track to be played in the background in shopping centres as the holiday season draws near…’ As Lincoln himself asserts about this song as well, ‘…I have only recorded a few instrumental pieces in my career, but it’s one of the things I really love being able to do. I hope that ‘Miraculum’ will provide a musical setting that churches can grab onto and use in their own services during the holidays…’

If I have discussed this fact in a roundabout way but never hit the hammer on the head, let me do so now- Lincoln Brewster is a fantastic worship leader with an immense and prolific electric guitar skill that makes his ability to transform worship songs akin to how Stu G. enhances every Delirious? and One Sonic Society track he is on. Giving us equal amounts of enthusiasm, emotion, heart, passion, poignancy and worshipfulness within this Christmas album, Lincoln’s passion as a whole for music and worship never fades, resulting in an album that can be used in both a corporate and personal worship setting this Christmas season. Well worth the 7 year wait between Christmas albums, A Mostly Acoustic Christmas is a good follow-up for Joy to the World and is one of my favourite worship/Christmas albums, this year thus far. Well done Lincoln for this encouraging album, looking forward to worshipping alongside these songs in the upcoming weeks ahead.

3 songs to listen to: Little Drummer Boy, Miraculum, Angels We Have Heard on High