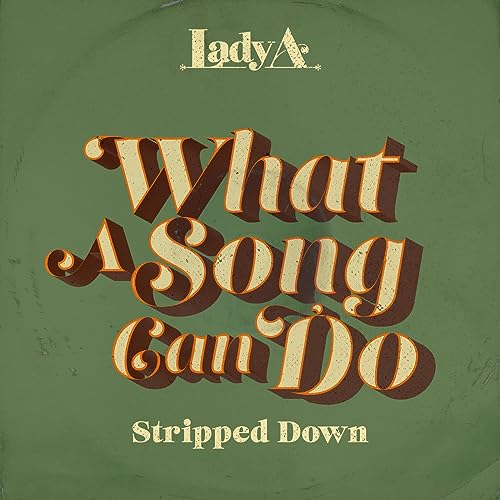 Lady A have been in and around the music business for quite some time. Ever since their self-titled debut way back in 2008, they’ve been steadily releasing albums every few years- and carving out hits like ‘Need You Now’, ‘I Run to You’, ‘Hello World’, ‘American Honey’, ‘Heart Break’, ‘Just a Kiss’, ‘Compass’, ‘Bartender’, ‘What if I Never Get Over You’, ‘Ocean’ and ‘What I’m Leaving For’, to name a few. They’ve been imprinting their mark and impacting the world for the past decade and a half…but it was in 2020 where the band started to make waves. Ever since the murder of George Floyd in May 2020, and reacting to the widespread commercial response to the protests that resulted from George Floyd’s death, Lady A decided that it would drop the Antebellum from it’s name and just be called Lady A…except if we all were to have followed the coverage of Lady A’s journey from being Lady Antebellum to now being Lady A, then we’d know of the name controversy, and while I won’t bore people with travelogue details that can be read on Wikipedia, what I will say about the controversy is this- that while research should’ve been done to see if there was another Lady A out there before taking the Lady A moniker, that shouldn’t deny the fact that Hillary, Charles and Dave are some of the most talented country acts in quite some time, maybe even rivalling Rascal Flatts when they were around. While it was only recently that the band Lady A and Anita White settled their dispute, what the band has continued to accomplish, even with the name change, is the continual creation of reflective and introspective melodies. The band unveiled one of their most cohesive and impactful albums, What a Song Can Do, in October 2021, and we as a site reviewed it here, highlighting standout tracks like the title track, ‘Things He Handed Down’, ‘Worship What I Hate’ and ‘Be That For You’, to name a few. Now in 2022, the band unveil to us something new-of-sorts again- ‘What a Song Can Do (Stripped Down)’, an acoustical version of the title track from last year, and my favourite version of the song, out of the two.

‘…‘What a Song can Do’, the title track, speaks about how the power of a song is so great, to the point where it can ‘…make you dance and make you cry, make you wanna give it one more try, start a band, and kiss that girl and break some rules, it’ll make you give your heart and get it back, change your mind just like that, when it’s like every single line was written just for you, ain’t it crazy what a song can do?…’ More often than not, we underestimate what music and songs can do in terms of it affecting someone’s life and trajectory and where they want to go- because in music, we have the license to speak about things that maybe sermons, speeches and lectures cannot allow. Music is the avenue to discuss values and ethics, opinions, and schools of thought. It is where we bare our souls, and it is one of the only avenues that people can connect to on a soul-to-soul level, without much bias at all. Music (and by extension, songs) from all genres and time periods are created so that the listener can be impacted, so that they can maybe see themselves somewhere in the song, and can maybe relate on a personal level to a 3 and a half minute melody that could’ve been written in a different time period, and for a different demographic…and some[how] it was the song that ‘spoke’ to you…crazy, and cool, right? ‘What a Song Can Do’ is a great way for us to understand the continual way that I firmly believe God uses music, maybe in ways we don’t understand, and yet He uses it, nonetheless…’

It is in this quote that I wrote about the song, that I’ve appreciated the band’s song, and this stripped down version makes me love it even more. Both Charles and Hillary sing together powerfully and harmoniously, as we see a song that speaks about the power of songs, all the while being impactful and powerful itself as well. ‘What a Song Can Do’ reminds us that God can use anything at His disposal (even a song that we don’t like, or even a song by an artist we don’t like) for Him to get our attention, and if it is through a song from Lady A…then praise the Lord for that. A song that reminds us of how music that touch a soul in a way that TV shows, movies or even sermons may not, kudos to Hillary, Dave, and Charles for this touching and reflective rendition. Maybe more acoustic renditions of songs from What a Song Can Do, in the future? You never know what these acoustic renditions of these songs could do (no pun intended).