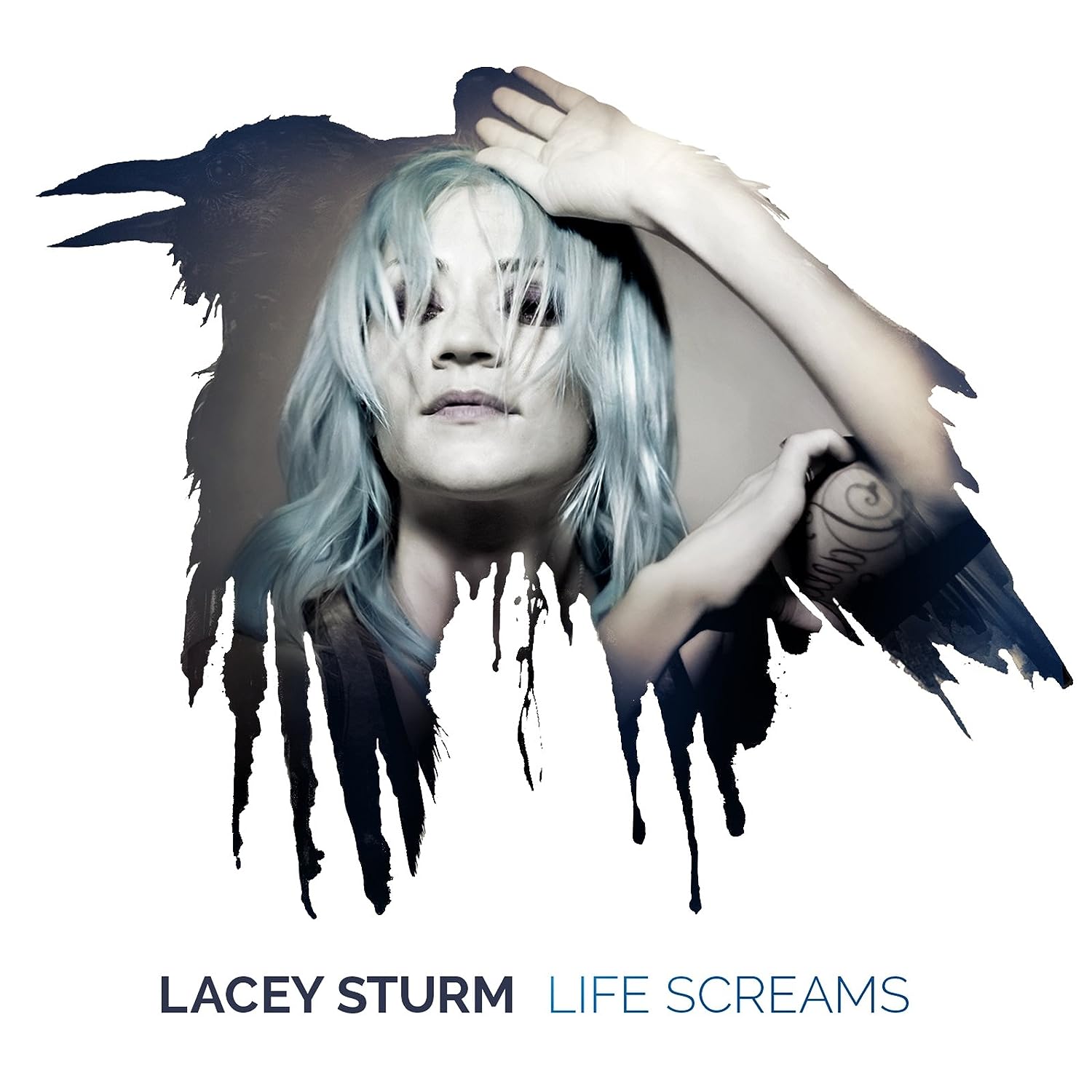 “…Whenever I can slow down, be present and pay careful attention to the people I’m with or the moment I’m in, I find Life speaking to me – telling me to be brave…that there is hope, that there is a bigger story of beauty and love and purpose unfolding. This is when I feel the most inspired. Whenever I’m challenged to grow in my soul…” Formerly the front man (or should I say front-woman) for the rock band Flyleaf, Lacey Sturm recently released her debut solo album Life Screams, which essentially picks up from where New Horizons (Lacey’s last album with the band) left off. Though fans and critics alike were somewhat understanding at Lacey’s personal reasons to leave the band, there was valid reason to be miffed or perplexed, given that when Kristen May took up the mantle of being lead singer, the band delving into the pop/rock route in terms of genre. Nevertheless, given that I wasn’t really a Flyleaf or Lacey fan (yep, I didn’t really listen to Between The Stars!), I was intrigued to hear Lacey’s new material. Boy was I blown away! With Lacey continuing the hard rock genre, Life Screams is possibly one of the most personal, honest and emotional albums of the year thus far, so let’s dive in to see my thoughts shall we?

The stirring 38-minute duration track list opens with the lead single “Impossible”, a head banging guitar led rocker proclaiming the sanctity and the importance of every life. As Lacey boldly with conviction reminds us of the fact that ‘…every morning, I see another miracle I can’t believe, I’m living the impossible, we are the same and we are the wonder, another day of living the impossible…’, we are encouraged to take life with both hands, and live it to the fullest with everything we have, as we don’t know how long we have left on this Earth as well! As Lacey expertly utilises her trademark Flyleaf screams to great effect, we are immersed into a special rock record that has us marvelling in wonder of Lacey’s prowess as a writer and entertainer.

With more mellow bass guitar driven verses and a pulsating, energetic guitar led chorus, “The Soldier” continues with the motivation, as Lacey speaks to her demons (the devil?), proclaiming that they do not have a hold of her anymore, that the soldier in her fights and fights until the war inside her is won, until she finds peace with herself. Though we all know peace is found in Jesus, and Lacey does too, the vagueness and ambiguity here is sure to grab the attention of people from all walks of life and faith, as we remember that fear and adversity in our lives is only big if we go through life alone, which I’m sure we all don’t and we shouldn’t, given that God, our family and our friends are in our corner.

The tongue in cheek, but all too real “I’m Not Laughing” is a rocker, and is fit for moving at clubs and pubs, but nonetheless tackles a serious matter, of gossip and slander and the effect it has on people, with Lacey declaring that ‘…I’m not laughing, don’t get confused, I’m not pointing my finger, don’t want to be like you…’. It’s worrying when bullying and rumours turn children and even adults into blubbering heaps as they mistrust the world and hold grudges, yet this song is sure to bring this issue to the fore as we try to understand that everyone is precious, and words can hurt someone, even if it isn’t shown on the outside. The 2-minute spoken word eye-opener “Vanity” is next, featuring Propaganda, as we are shown an intense dialogue between two people in an abusive relationship, and one person trying to get out of it to find real and true love. Though the ‘song’ ends before any real headway or solution is found, we at least are challenged with the notion of what is the true meaning of love, as the theme of true love and security overflows into probably the most revealing melody on the album. “Rot” has Lacey belting out profound lyrics from the top of her lungs as she asks God to save her from everything around her, all of the negative influences that will ultimately fade away, will rot at the end of the day. Against the backdrop of intense and explosive electric guitar, we are posed questions too, about which parts of our life are making us better people, and which parts aren’t. Something to ponder, right?

The midpoint of the album probably has the most generic title ever, as “You’re Not Alone”. However the subject matter is anything but generic, as Lacey passionately reiterates that God is with us all the time, that ‘…you’re not alone, beyond the universe echoes out a promise to us where the darkness meets the day, you’re not alone, close as the two of us, stronger than the pain runs through us, you can feel it when you pray, that you’re not alone…’. With the themes of the song inspired by the death of a family member, this non-confrontational melody is sure to provide solace and healing in even the most difficult circumstances and no doubt will be a track that directly leads people to Jesus, the Healer of everything.

“Feel Like Forever” is a high octane electric guitar rocker, as Lacey skilfully and vividly recounts how we as people may feel like a failure, like nothing in our lives are going right, yet she also gives us hope in the chorus, highlighting to us that Jesus is forever, that all we need to do is call to Him and He’ll answer. The title track surprisingly takes the tempo down a notch, with the piano led ballad sung from the perspective of God, with Him calling us to be in relationship with Him, to commune with Him, as we see evidence of Him in all of creation and the signs and wonders around us, through life and God screaming out all around us of His existence. While “Faith” is the last of the ballads, as Lacey ardently and eloquently describes the ideal perfect relationship, and everything that has gone right with the relationship, alluding to the fact that faith and belief in God, and us being in relationship with God, is the only relationship we’ll ever need, that will be enough for us.

The live Police cover of “Roxanne” shows Lacey fervently singing to a prostitute, or a woman in an abusive relationship, reiterating that there is a way out, indirectly revealing that the way out it Jesus, that ‘…I know your heart is broken, and it’s got you so unopen, I know your heart is broken, Roxanne, don’t try to pick up the pieces, just leave them where they lie, I’m going to give you a new heart tonight…’, with the added verse providing extra depth and also some hope and light at the end of the tunnel. The album ends with the positive “Run to You”, driven by the acoustic guitar (nope, not the Third Day song from 2008!), as we hear a message sung in the perspective of Jesus, that ‘…I’ll let you go, if that’s what you want, but I hope you know, my love won’t stop, you say it’s not true and you call me a fool, but call out my name, I’ll run to you…’. Everyone has free will and a choice to follow and love Jesus- it is not forced upon us, and this song reiterates this fact, as we remember that God loves each one of us so that we can make our own decisions in life. However, I am sure that Lacey is hopeful (and I am too!), that this exceptional album closer makes us think about the extent of God’s love even if we do not return it. If God loves us when we are underserving, and even when we do not turn to Him or recognise His presence or sovereignty, doesn’t that say something about His character? That He relentlessly pursues us time and time again is mind boggling, and definitely something to ponder deeply about. Lacey has provided us with a unique album full of surprises, and one that definitely deserves multiple listens, despite the intensity of the music through the duration.

“…My advice for aspiring musicians and bands would be to let your art be fun and genuine. Do it because you love it and not because you want an audience. And then people will sense your security and want to listen to what you are doing…” This advice that Lacey has given to young aspiring musicians seems to be advice she is following herself, as this album has ‘fun’ all written over it, though despite having heavy but necessary topics tackled in the album. Life Screams is just the beginning for Lacey Sturm, but even if Lacey doesn’t not record another album ever, I am sure that God will use her in whatever sphere of influence He places her in, and she can share the gospel in whatever way He chooses. Well done Lacey for a stellar debut solo album, and one that I hope won’t be the last!

3 songs to listen to: The Soldier, You’re Not Alone, Run To You