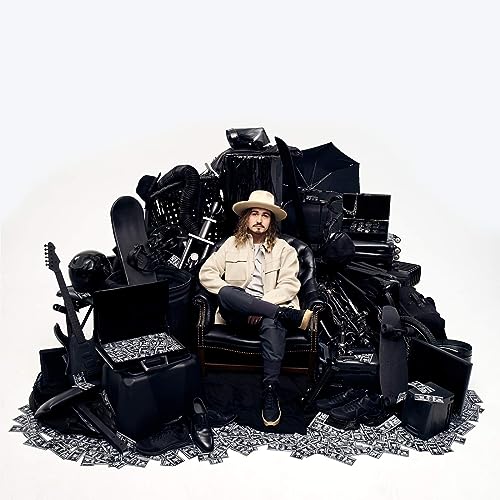 Signed to Centricity Music in 2015, Jordan Feliz has had a stratospheric and gigantic rise to fame. Partly due to the smash hit “The River”; and you might have thought that he was a one-hit wonder. However, as the years rolled on, it has been evident to see that his music exudes a sense of honesty, authenticity and vulnerability that we probably haven’t heard and seen from many more artists recently. I guess that’s one of the reasons why Jordan’s sophomore album Future in 2018 was so, so, so well received by critics and listeners alike. With hit songs such as “Changed”, “Faith” and “Witness”; listeners have been responding to and loving this album for a while. Though the very unnecessary release 1 Mic 1 Take released in 2017, fans and listeners were treated to Jordan’s well thought out, highly professional, and greatly inspiring second solo album- and boy are the songs a sight to behold. Future contained 13 tracks of extremely contagious pop music (definitely not in the mould of CCM artists like MercyMe, Big Daddy Weave or Sidewalk Prophets, but rather in the vein of mainstream counterparts Katy Perry, OneRepublic, One Direction, Taylor Swift, Justin Bieber, Selena Gomez, Sam Smith or Ed Sheeran), and each melody is of very high calibre. Like ‘mainstream artist type of quality’.

Though there really shouldn’t be a divide between markets, the reality is that there is, and that’s sad. But Jordan has shown us through Future that high calibre songs can be recorded. And when they do, I reckon we should let God just do whatever it is He wants to do with these songs. While this album still is a bit too pop for my liking at the moment, it’s grown on me quite a lot in the past year or so, and perhaps this means that in the future, Jordan’s music may be discovered by listeners of these aforementioned ‘mainstream’ artists, or maybe even by these artists themselves! Fast forward to the end of 2020, and now we’re blessed to see and hear Jordan’s third full length studio album Say It. With tons of promotion (lead single “Glorify” dropped in May, and “Wounds” in September), as well as collaborations galore here (TobyMac, Terrian, Lecrae, Hulvey, Aaron Cole); Say It is a pop/CCM lover’s dream. But will the album impress the rest of the general market, who are wanting more variety musically and lyrically?

And the answer is… Say It is mostly good with a few underwhelming blips. So let me just get the glaring negative out of the way. Now I’m not a critical person by nature, and I absolutely hate bagging people. So it pains me to say that even though lead single “Glorify” contains slick guitar riffs and objectively beautifully sung vocals neatly packaged in 3 minutes of radio pop… the song unfortunately does nothing for me. We have had tons of songs about glory and lifting Jesus’ name up. Just check them out! “All The Glory” from Building 429, three “Glory” songs by Phil Wickham, Remedy Drive and The City Harmonic, “Lord Let Your Glory Fall” by Matt Redman, “For Your Glory” – 2 songs of the same name but entirely different! – from Matt Maher and Matt Redman, as well as “All Glory” from Tim Hughes, “The Power And The Glory” from Hillsong, “Glory In The Highest” from Chris Tomlin and “Show Me Your Glory” from Third Day. So to add another track that says “Glorify”, even if it is from a reputable and popular CCM artist like Jordan, is overkill to the nth degree. Some would say I’m being too pedantic and this song is awesome or fully sick. But no amount of positive adjectives and superlatives can shake me from my thought that this is plain unoriginal and lazy, sorry Jordan. Maybe in time I’ll connect with the song, but maybe I won’t. That’s ok though, as I know that Jordan’s heart is in the right place. If others connect with “Glorify”… then so be it!

I don’t know if I’ve ever been as excited for a song as I am for this one. Glorify means ‘praise and worship,’ but the sub-context of the word actually is to acknowledge and reveal the majesty and splendor of God by one’s actions. For me, coming out of this hard season of anxiety, stress and messed up priorities, now all I want my life to do is to glorify. I want to reveal the majesty of God by my actions…our world is fearful, for good reason, but the beauty in all of this is that Jesus is still on the throne and in control of all of this. What an amazing time to reveal the majesty of our God and for believers to come out of the woodwork, donating their time and encouraging people by speaking life and truth over them.

So what abut the other 2 versions of “Glorify”? Well, guess what? They somewhat make up for the underwhelming mishap; as we can now juxtapose this song with 2 other versions. The rerecording with TobyMac and TERRIAN, as well as the rap/pop infused rendition with Lecrae and Hulvey. And while I did indeed praise “Glorify” when Toby and TERRIAN were guests on the track, unfortunately the same cannot be said of Lecrae and Hulvey’s additions. Sure the raps are tight and fully impressive, but they just don’t fit with Jordan. I don’t know what it is! While Toby and TERRIAN have given this version new life and have created a gem for the ages… Lecrae and Hulvey do a solid job, but there’s still a bit of disjointedness and a weird feeling that I just can’t place. Sorry to all of the rap enthusiasts, but I firmly believe that “Glorify” works better as a TobyMac song- if Lecrae and Hulvey guested on a track with Toby, that’d be absolutely amazing! So does it make me a bad person if I wish that Toby would’ve recorded this song by himself instead of Jordan? Maybe. You be the judge.

When “Wounds” released last year though, even though I was confused by how much I loved, and hated “Glorify” at the same time; we were further glimpsed into Jordan’s amazing artistry- the poignant, heartfelt, honest and vulnerable piano ballad that impressed me on every level. With this song in particular, there’s no denying Jordan’s heart and passion here- and I believe that we have a winner! I mean why wasn’t this track the lead single of the new album instead of “Glorify”? Led by powerful and compelling strings and keys, this soft reflective ballad is my favourite Jordan Feliz song since “The River”, and my favourite Jordan Feliz ballad since “Satisfied”! Yep, I’m that bold! And now, there’s nothing much left to do except to tell you all to listen to this masterpiece and this work of art (as well as the alternate acoustic version)! As Jordan relays that Jesus’ love heals all wounds, let us all be encouraged by the fact that we can come to Him broken, and that He can and will restore us fully!

This song is, by far, the most vulnerable song I have ever released. Let my life be the proof that when you allow God access into the hurt, into the shame, into the trauma… He comforts, He restores, He heals.

Surprising me very greatly (in the sense that I had lower expectations given “Glorify” and now they exceeded anything I could ever envision from Jordan lately!), Jordan Feliz’s “Wounds” is a track that will impact and encourage- no doubt about it! The second single from Say It, it is actually “Wounds” that sets up the rest of the songs on Say It rather than “Glorify”. Opening track “Jesus Is Coming Back” is as musically energetic and fun that I have heard in a long while, with Jordan powerfully proclaiming and declaring that Jesus is coming back, and reassuring us that no matter how hard and difficult life gets now, that there is a forever promise that is coming for us, that there is certainty that Jesus will come back for His children and we will get to be with Him in paradise someday. As Jordan fervently relays that ‘…so keep your head up, Jesus is coming back, Jesus is coming back, no, don’t you give up, Jesus is coming back, Jesus is coming back, and when the world gets complicated, we’re gonna keep on celebrating, ’Cause we know (Yeah we know), Jesus is coming back, Jesus is coming back…’, we are reminded of the hope we have in Jesus Christ, even in these difficult times. “Next To Me”, a pure pop track, is a ball of inspiration and joy, as Jordan eloquently highlights that God is always drawing him closer to Himself, like the parable of the lost son or the lost sheep; while the hopeful 3 minute pop tune “Real Me” speaks about the topic of insecurities, and that God loves us even with our flaws, even though I enjoyed both Natalie Grant’s “The Real Me” and Leanna Crawford’s “Photoshop” both much more- both tracks relay to us the same theme of God loving us despite our imperfections.

One of the most personal, honest and emotional tracks I’ve heard from Jordan, “When I Say My Prayers” is sung about someone- a family member or a friend- who has died, and Jordan prayerfully highlighting the fact that he’ll be able to see them in heaven one day (similar in theme to Sidewalk Prophet’s “This Is Not Goodbye”; while Jordan amps up the intensity further with the gospel/dance infused track “Only Love”, whereby he passionately declares that only Love (aka Jesus’ love) has a hold of us, that sin and death aren’t bound to us any longer. “Stars In My Sky”, a competent yet not outstanding pop song, has Jordan channelling his inner Ed Sheeran “Shape Of You” type of vibe (and is a low point on an album full of strong offerings!), as Jordan reiterates that Jesus has put the stars up in the sky of his own life; however one of the standouts on Say It is next- the heartfelt ballad and potential single “Another World”, whereby Jordan eloquently and ardently lets us know that he’s from another world, as in Heaven is his home, and that ‘…my heart calls out to my home, and home calls out to my heart, I reach for You ’cause I know, that home is where You are…’. The album then ends with the confronting and no-nonsense title track, similar in theme to Matthew West’s “Love On The Radio”, as Jordan and guest vocalist Aaron Cole trade vocals to perfection and bring home the message of singing for Jesus all the time, and always directing their songs to the Author and Perfector of our faith, with the declaration of ‘…if it’s not You that we’re praisin’, then it’s all overrated, ain’t it? If the name of Jesus ain’t lifted up then who needs us? Sorry y’all if you hate it…’ bound to grab the attention of any and all who listen.

When I heard “Glorify” from Jordan Feliz, I was a bit worried and apprehensive of the next full length album. But now that I’ve heard Say It in full, I’d have to say that Jordan’s new project reminds me just how impressive and moving Jordan’s songwriting ability actually is. And yes, even if you don’t connect that much with “Glorify”, there’s no denying the passion of this inspiring young man of God, as evidenced in a number of the songs here. This project is not as compelling and engaging as albums from Needtobreathe, Natalie Grant, Matthew West, Colony House, Echosmith, Selena Gomez, We The Kingdom, Kelsea Ballerini, Gabby Barrett, Lindsay Ell, Josh Groban and Alicia Keys… but it is still a highlight in the year that was 2020. So what are you waiting for? Check out Say It and let me know what you think.

3 songs to listen to: Wounds, Jesus I Coming, Another World