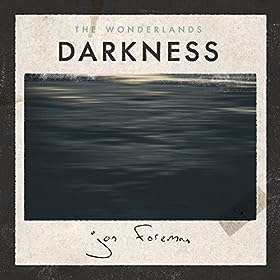 “…There’s darker stuff, but for me, I wanted to go all the way there. I wanted to have these records to express hope, to express faith with authenticity. You have to ask the real hard questions of “is there a good God?” when horrible things are happening. I think any mature adult faith that shies away from those questions, does not only yourself a disservice as a believer, but — what kind of God is not able to handle those questions? Maybe that’s not the god worth believing in. That’s kind of the bottom line for me…” Probably one of the most emotional, vulnerable, honest and lyrically profound singer/songwriters, Jon Foreman, the lead singer of rock band Switchfoot, has created musical gems and treasures yet again, with his third EP in the series Wonderlands. Releasing Darkness this past week, in direct ‘healthy competition’ with The City Harmonic’s new album We Are; the next lyrical and thematic progression in the series of the 24 hours of the day, sees Jon going as deep as he’s ever gone.

With Switchfoot’s most recent achievement being the surfing documentary Fading West and the companion soundtrack album of the same name (both released in January 2014), alongside Edge Of The Earth (a b-sides EP released in September last year to commercial and critical acclaim, with such sublime quality in the same league as the inventive and daring full length album), as well as an unnamed not recorded yet new album, to be released in 2016; it’s no secret that apart from the rock band thing, lead singer Jon Foreman has been plying his trade as a solo artist. And if you’ve heard both Sunlight and Shadows, and read my reviews here and here, then you know that most things, if not everything, that Jon dishes out, is pure gold. It’s the same sentiment and trend here. So let’s see how does this EP stacks up against Jon’s previous solo albums, EP’s and the entire Switchfoot discography. The setting of darkness alludes to maybe songs which are more mellow and introspective, but is that the case?

Opening the album with the multilayered synth driven acoustic ballad “Come Home”, we are presented with an honest, vulnerable and emotional song where Jon ardently sings across strings and keys, in the perspective of someone who is doubting their faith, and is thinking of walking away. However there is reassurance and hope in the chorus, where Jon sings from God’s perspective, or from a friend’s perspective, that ‘…looking for reasons to try, a reason to live or to die, won’t you come home, back to where your heart is, this is the meaning of life, you were born for the dance, not the fight…’. Implying that the persona comes back to their faith, or to their life, with a better appreciation of it than before, this opener is hopeful yet also opens up a lot of questions, such as how do we know how to get back home, if we aren’t fully sure of where home is? While not giving any explicit answers, Jon presses on, and allows us to wrestle with and ponder the deep questions in life.

Though musically the whole album is somewhat subdued and reflective, the topics tackled here are anything but bleak and depressing, as Jon speaks about issues prevalent today and tries of offer up comfort and solutions. “Beautiful Part II” is a haunting and mysterious acoustic guitar strumming and synth led melody where Jon explores the fact that the persona thinks of herself as unworthy and unloved. Though Jon provides them hope, reminding each one of us that ‘…you look like a funeral, but I see right through, you’re so beautiful, you’re just used to being used, stuck in a crucible of consume and consume, you’re so beautiful…’, either singing in the perspective of God or a friend.

The worshipful folk/acoustic ballad “You Alone”, led by captivating electronic effects and earnest keys, is much more overt, as Jon eloquently sings out God’s praises, that ‘…You alone can heal my soul…’, while the piano pop “He Said” is an example of an expression of our love for God. Led by vibrant and refreshing mid-tempo strings, Jon passionately sings in the perspective of a young woman who had had every life hardship thrown at her, but still praises God’s name and still looks to Him for strength. Reminding me of what Job would say when everything was ripped away from him, the words in the bridge reminding us that ‘…I’m holding on to You and I won’t let go, You’re the only thing that’s true, and I won’t let go, You’re the only thing that’s true in this whole world of black eyed blues and disillusioned points of view…’, highlight the fact that God is constant, and He is forever, which should bring anyone assurance and comfort, from what is one of my favourite songs from Jon Foreman ever!

Giving a friend advice in the strings led acoustic guitar led mid-tempo song “Larger Than Life”, Jon recounts how one of the persona’s friends is egotistical and thinks they have it all together, when they don’t, so this song is kind of like a letter addressed to him or her (addressing their flaws in a not so subtle way, but in a constructive criticism kind of way…), in the hopes that they can turn their life around. While “June And Johnny”, symbolic for Johnny Cash and June Carter, is an acoustic guitar driven 2 minute love song dedicated to Jon’s wife; the EP ender “Inner Peace”, is one of the most personal, honest and encouraging songs on the EP, with Jon recounting that to have inner peace in every aspect of our life is to be whole, yet asks question after question, as to how to attain inner peace. Asking the question ‘…how can we be ourselves, if we don’t know who we are, I’m looking for the one that made me…’ I am sure that this song will create much debate with many critics and listeners wondering if who we are is dictated by our choices or by who God intended us to be. And while Jon saves his ebst song for last, and opens up a whole new other type of discussion, which may or may not be saved for another blog post, I am left sitting in awe of such an accomplished singer and songwriter. Well done Jon for the most confronting of your three EP’s this year so far!

“…if I’m going to believe in the Creator who’s all powerful, all knowing, transcendent, then I want…I want Him to be a big God! Not someone who can’t handle when I’m throwing a punch. So I feel like that’s what this is about. It’s about asking big questions and I don’t want to hold back…” If you thought that Sunlight and Shadows were both epic, then Darkness continues on that trend. Each and every of the 7 songs are sure to inspire, confront, comfort, reassure, ask questions and probe, as we try to find out our purpose and destiny, and discover who God wants us to be in this life. Personally I see the 7 song EP, the third of a 4 EP series The Wonderlands; as a reminder that the darkness that occurs in our lives is sometimes necessary for character growth, and can also bring us closer to God. With Switchfoot still making exquisite music, Jon Foreman’s solo work has also benefited from a stellar band career thus far, and I hope and pray that all 24 songs on The Wonderlands are appreciated and loved by all who listen. Well done Jon I can’t wait for Dawn later on in the year!

3 songs to listen to: You Alone, She Said, Inner Peace