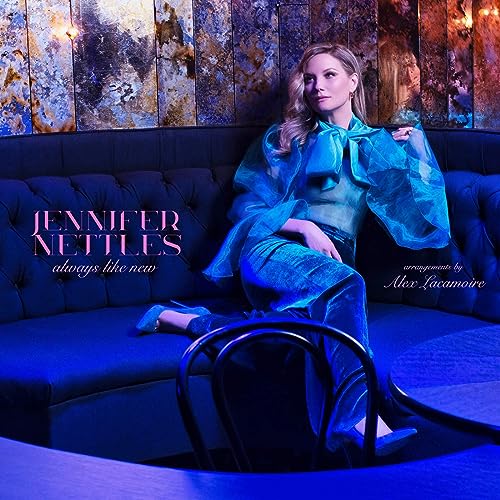 Call it serendipitous, or chance, or fate or destiny or even God working in mysterious ways… but I think I have Jon to thank for this next album that I’m about to voice my thoughts on. Jennifer Nettles, has been in and around the music scene for a while (as part of the country group Sugarland as well as through her own solo work!), and if you want to read more about her and how she got into music, you can read my brother’s blog about her here. Yet at the time of Jon writing about Sugarland and Jennifer for his blog- I was apprehensive and unsure. After all, they weren’t a part of Jon’s list until when he wrote about them… they came out of nowhere at least to me!), and I thought Jon had written about his quota of country artists already. Hence my initial apathy towards Jennifer and her music- I didn’t want to like her music because that meant altering the blog list, which was something that would be tedious.

But Jennifer’s powerful and hard-hitting vocals grabbed me from the get-go- and the rest is history (we did alter the list, in case you were wondering!). She’s forged ahead with a stellar and respected country career- as part of a band and as a solo artist. But her latest album Always Like New, is a Broadway themed album. 10 songs from 10 stage productions that abandon the country genre and instead focus on big vocals. It’s a far cry from songs like “Chaser”, “I can Do Hard Things”, “My House”, “Hey Heartbreak”, “that Girl” and “Every Little Thing”… but for those of you who believe that Jennifer is changing genres; let me just say that this powerhouse vocalist actually seamlessly transitions into Broadway quite nicely. She isn’t leaving country though, as Sugarland are set for a new album later on this year… but let’s say that if you’re not a fan of Broadway, or don’t know many Broadway productions; then Jennifer’s songs here can and probably will persuade you to dive deeper into this particular genre as well as maybe influence you to watch some Broadway shows as well.

Jon and myself were premature, and we were very sheltered. The only types of musicals we saw when we were younger were the Disney themed ones, as well as Oliver Twist and Phantom Of The Opera. We never saw Les Misérables (only the movie with Hugh Jackman and Russell Crowe), nor Wicked, Cats, Mamma Mia, Chicago, the Book Of Mormon… nor anything else (not even much of anything on this list of highest grossing musicals!). And we were content with that. But a world of something I had no idea of was opened up today when I listened to Always Like New from Jennifer. See, these songs are technically near-flawless, and Jennifer’s voice is sublime. I could listen to her sing all day. But lyrically, though on their own these songs are powerful and poignant and inspiring and thought-provoking (“You will Be Found”, “Oh What A Beautiful Mornin’”, “Tomorrow”, “It All Fades Away” in particular!); I can’t in good judgement talk about these songs when I don’t know the context. These musicals that the songs are originally attached to are very, very iconic. And ‘reviewing’ this album properly when I’ve seen all of the musicals… will probably be in a few years’ time at best. Thus this very ‘different’ review (or shall I say brief endorsement!) won’t be speaking about these songs at great length… but rather about the calibre and professionalism of the album as a whole. Always Like New breathes life into the musical and Broadway genre that I don’t think the general public has been exposed to that much lately. And given that COVID-19 has been still hanging around for a long time; musicals and theatre productions haven’t been present on a global scale over this past year and a half. So if we can’t go to musicals, then this album is the next best thing- and if you aren’t well-versed like myself in musicals… Jennifer’s music will firmly make you if not a lover of musicals then at least an appreciator of them. And as I end this review (I cannot delve into these songs with confidence, shall I ‘review’ this album later on in a few years? maybe…), I’ll leave you with excerpts of Jennifer’s extensive interview with grammy.com. Do Jennifer Nettles’ own words encourage you to take the plunge into musicals in general? Are you a fan of Jennifer’s solo material and Sugarland? Both or just one? What do you think of this out-of-the-box album? Let us know in the comments below!

We started recording the album in June 2019, and the last day was March 12, 2020, which was the day Broadway got the news that they were shutting down. It was a very sobering and poignant moment, so this album has been its symbol of not only what has happened over this time of the pandemic, but even more importantly, of where we’re going as Broadway reopens. I love the Broadway community, and it was that love that inspired this record, and I’m proud to be a part of it and a flagbearer of sorts.

I’m a massive fan of Alex and Adam; whenever we discussed the creative part of the project, Adam said, “I’d love to connect you with Alex. He’d be amazing.” We connected and it was like a house on fire. He was excited, interested and inspired! We had a couple of conversations, and I sent him voice notes with directions for those three songs. We just started a dialogue and got serious about it because this project has tons of meaning for us musically; to work together to explore what we could really reimagine in a way that was honoring the original songs but also allowed for a rediscovery of them.

For most popular culture, if they know my work, they know it from what has been the most accessible, visible, and “successful” in terms of volume, and that would obviously be in the country genre. For me, it has always been about being an artist and that’s why this expansion into musical theater is a celebration and continuation of my narrative of being an artist. I’m blessed and lucky to have had the success that I’ve had in country music. I’d been making country music for decades before people saw me in that way. I’ll continue to do it for the rest of my life and will continue to tell stories in musicals and in front of the camera in TV and film because, as an artist, that, for me, is just a part of who I am. It may not be a part of what someone knew first, but I hope it’s a way that I can be seen and allowed to explore more.

My gift and obligation as an artist is to help people synthesize big emotions and feelings. Over the past year and a half, and in some ways for longer than that, we’ve found ourselves with many powerfully negative feelings and emotions, challenges and injustices that we’ve had to synthesize. I approach it in a way that comes from the heart. Don’t get me wrong. There are so many moments when I want to answer comments on Instagram with a blowtorch because people can be gross with their cowardly words, but I want to respond to that [with] kindness. I try to shine a light from my heart on the truths of what I see, what it is to be a human in this world. It’s very easy and human and very natural to want to scream back and allow ourselves to become so engrossed in what’s political debate and discussion. Sometimes we even lose sight of what we’re trying to accomplish within these policies, legislations, and changes that we want to make. Sometimes I do it with irreverence and humor, but that’s always the intention, inspiration and motivation.

I always want to listen to people outside of my circle. Cynthia Erivo and Leslie Odom Jr. inspire me. As a white person, I want to ensure that I listen to people of color and direct attention to them, especially regarding racial injustices. It’s essential that I raise my son in a kind, just world and if I see anything that doesn’t align with that, I feel a responsibility to him and everyone around me to say something.

Right now, Broadway is like a litmus test when it comes to reopening live entertainment venues. The Broadway community is a prime example of resilience, focus, solidarity and it’s an incubator for talent. I hope this album introduces people who might have never seen a Broadway show to its magic and see what inspires me so much for themselves and feel inspired.

3 songs to listen to: It All Fades Away, Oh What A Beautiful Mornin’, You Will Be Found