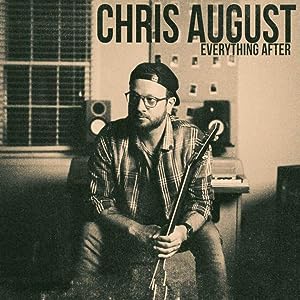 Chris’s new EP has come at a little surprise to myself here. Because on the heels of a successful album in Seasons last year, to see Christ unveil yet another EP of sorts, leaves me a little baffled. The songs on Seasons were just about to come into their own, and I was just about to enjoy the songs on Seasons for what they’re worth, and now here we are, looking at yet another Chris August EP/album. Though there is nothing wrong with unveiling new music, there is when I, the reviewer, feels like this new collection of songs from Chris feels a little less inspired and much more mellow and at times tiresome compared to the wide array of musical styles represented on Seasons. And this is not a Chris August bashing session- rather, it is a moment of being reminded that more, quickly, doesn’t mean that each album offering will be good- Everything After is an example where more is not better. And while this new EP may resonate with some people, for me it simply wasn’t the case- I can appreciate the songs and the material that were unveiled, but for me, the connection to the album was certainly lacking- maybe I’ll be as impacted as I was when I heard Seasons, over time; but as of right now, Chris’s new EP unintentionally seems like a money grab. Maybe what he should’ve done was to wait until there were a few more songs, and maybe release another collection of songs as a full-length instead?

Regardless of my own sentiments on how I initially thought the EP was, Chris nevertheless should be commended for releasing new material quickly, after an extended period of not doing so from the 2015-18 period. Nevertheless, while Chris’s intentions are great, the end result can be a mixed bag. Lyrically the EP is top notch- biblically sound theology, encouraging lyrics, music that is far from radio friendly, Chris by all definitions should have this EP in the bag. And for the most part, he does. And I’m sure othe people will connect with this EP so much. It’s just not me at this point in my life. Maybe it’s because I’m riding right now on enjoying just how musically unique and inspired Seasons is, that when Everything After came with its overall mellowness; the end result was a bit of a let-down. I felt like I wasn’t lifted musically that much during the 5 track run. Which is a little odd- we all know how Chris himself can create upbeat songs- ‘Unashamed of You’, ‘Center of It’, ‘Starry Night’, ‘Lips’, ‘Moonlight’, even ‘He’s Still Here’; to name a few, are evidence of his upbeat pop nature.

In spite of my own personal feelings of how I have connected to this EP thus far, one cannot deny the myriad of topics that is discussed within the confines of the 5 songs on this EP- ‘Know You More’ is a song that speaks of knowing God more, much more than religion or tradition can tell us. Mellow and acoustically slow, I tried really, really hard to make it through this song in its entirety- but I didn’t. Still, the lyrics of this song are gems to behold, and maybe, if the instrumentation was a little more up-tempo and a lot less sombre, maybe I could get attached to the song a little more. Still, it is the lyrics that make the song- and with words like this: ‘…sure I could sing You a song and learn from a speech that I heard in a church at the start of the week, and it’s good but that can’t be all, cause I can recite You a prayer I read in a book, what good is my heart if I still overlook the true intention of love, the time that I take will just be a waste, if I stop to see but never to taste, speak to me Lord, I wanna know You more…’, it’s no wonder this track, though musically subdued more than even I would’ve liked; is still one of my favourites on this EP!

‘Beyond the Mystery’ is an acoustic/bluesy/folk song that reminds us all that there are just some things that science cannot explain- like the place and situation where and when God communicates to a person’s soul- it is indeed mysterious and something we all know science cannot comprehend; while ‘Never Stop Loving You’ is a song and commitment to our God, stating the fact that regardless of what we’ve done or not done, our actions cannot determine God’s love, that in all of our uncertainty and despair, God still loves us. ‘Stranger’ employs the acoustic (or is an electric acoustic) guitar as a means to employ the folk-blues genre on this track- a song that is a love song for His wife; while the EP rounds out with ‘Changing’; a track that can hopefully realise that the answer to a lot of themes and topics discussed, should be one of positive and active change; rather than one of inaction and passive moments of letting moments slip away, as this song of lament showcases.

‘…when I sit down to write a song, I have no rules. I’d never do anything inappropriate, that’s for sure, but why would I not want to write a song for my wonderful wife? Why would I not want people to have songs that are appropriate for husbands and wives to dance to? …[creating the EP] gave me time to sit back and think about what sound I was really going for. I love Stevie Wonder. John Mayer is one of my favorites. I was just going to write songs with no motives, and each one is so different from the other. Some are Christian-based, some are love-song based, but they’re all life-based in general…[as we open up our hearts, it] might be a little awkward at first, then you get used to it. The thing that surprised me was it can be emotionally draining after a show, because there are so many heavy things to talk about. I go through something somewhat major, and then so many people come up to me afterward and say, ‘That’s exactly what I’m going through.’ It’s easy to think we’re in this far-off place by ourselves, but really fast I saw that a lot of us are dealing with the same things. It’s pretty cool to see that…’ It is in this quote that, though I didn’t connect as much to the music itself than initially thought, I can still respect Chris for his music, and I’m sure this EP will touch people on a personal level as the months roll on. Maybe it can impact me profoundly in the future. But for now, maybe I am ok with the EP not impacting me at the moment, because, just because I’m not feeling the music, doesn’t mean there’s something inherently wrong with the EP at all- Chris may be doing all the things right- I may be the one who may not have my heart open to see the styles that Chris is venturing into. Regardless, this EP objectively is a style that Chris has started on in a few songs on Seasons; and has continued here. The result? 5 songs full of lyrical goodness that need to be re-read again and again to gain the full effect. Should the album as a whole be more upbeat? I don’t know- if the songs were more upbeat, then maybe, I could’ve enjoyed the EP a bit better. I guess we’ll never know. What I do know is this- that Chris and his music right now is far from what he started off with- and that’s ok. In fact, Chris and his music is certain to be enjoyed if you love similar artists like Jimmy Needham, Shawn McDonald, Salvador and up-and-coming quintet Unspoken! Well done Chris for an EP that is different, and that is ok to be different. Here’s to yet another full length album to release in the future- whenever that may be!

3 songs to listen to: Know You More, Never Stop Loving You, Stranger