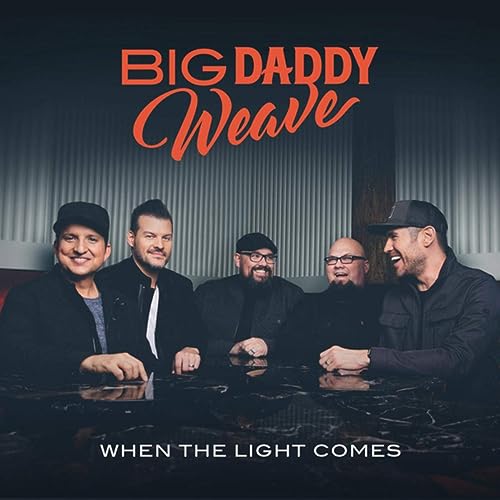 Way back in 2015, CCM band Big Daddy Weave released one of their most emotional, honest and personal albums ever. Beautiful Offerings flooded the radio and our iTunes, with singles such as “My Story”, “Jesus I Believe”, and the Bethel Music cover “The Lion And The Lamb” all resonating with us at various points in time throughout the past few years. “My Story” was especially…well, special, to the band, given that lead singer Mike had to lean on his own words of the song as his brother Jay (whom is also in the band) was undergoing surgery of both his feet in 2016 after a life-threatening condition. Little did the band know, while God was moulding and shaping their hearts in the midst of trials and tribulations, He was preparing their hearts for a seeds of a new album. Granted they weren’t thinking of a new album back in 2016- more like focusing on whether Jay would live or not; but as God works in mysterious ways, He was using someone half around the world to be a direct agent of His and to write an incredible chapter in the book of Big Daddy Weave’s ministry.

So have you ever had one of those life changing moments when you hear a song and nothing in the same ever again? Well Zach Williams- writer of the smash hit “Chain Breaker”- sure did, as he heard Big Daddy Weave’s song “Redeemed” on the radio after coming back home from a rock concert with his mainstream band in 2013. You can read more about Zach’s testimony right here, however the long and short of it was that Big Daddy Weave was a major help in where Zach is today as he ministers to every person and shares the gospel through song- the most recent release being his second album Rescue Story due out in October this year, as well as a live EP recorded live in prison worship services last year. Fast forward to now, and everything has come full circle. Zach wrote a song called “Alive” sometime last year when he was touring with…none other than Big Daddy Weave. He played the demo track back to Mike Weaver, lead singer of the band, and now here we are. With Big Daddy Weave’s brand new single- “Alive”, written by Zach Williams- the lead single for When The Light Comes, Big Daddy Weave’s brand new album which released today and is 4 years in the making. As the band extensively cover material and topics that they may have only glossed over in the past, When The Light Comes is a standout album and one of my favourites of 2019. With the lead single “Alive” encouraging us to live life to the fullest because we are alive in Jesus Christ; there’s no better place to start than this album if you’re not a Big Daddy Weave fan yet!

Generally most of the time artists are highly criticised by fans and professional writers if they promote covers as singles- case in point is Chris Tomlin with “Is He Worthy?” originally by Andrew Peterson! Yet the album opener with is the lead single “Alive” is nothing short of extraordinary, as the band have unveiled their most vulnerable single since “My Story” four years ago, and their most compelling single since “Audience Of One”, “Everytime I Breathe” and “Overwhelmed” in my opinion. Obviously radio friendly in nature (obviously!), and a shoe-in for WOW Hits 2020 if the compilation wasn’t being discontinued; “Alive” clocks in at just under 3 and a half minutes, however packs a punch emotionally and lyrically. With Mike fervently proclaiming that Jesus has saved us thus now we are alive, we are met with an anthem to declare whenever we find ourselves falling for the lies of the enemy. We can, with authority in Jesus, proclaim that ‘…now I’m breathing in, I’m breathing out, I was in the grave, but God You called me out…’; and we can say with confidence that because of what we done on the cross over 2000 years ago, and because of the resurrection, we are now alive in Jesus. A nit-pick of mine would be that this single may have held more meaning had it been released on Good Friday this year… but it’s a small nit-pick. As “Alive” is so, so inspiring and crazily catchy, I reckon I could just stop now and just say ‘buy the album’! But as this is a review- let me tell you all about the rest of the 11 tracks, and give you more reason to support these dedicated men of God!

Across the rest of the duration of When The Light Comes, we are met with a vibrant musical array of different genres, all with the one purpose to give God the glory, and all with the one purpose to lift us up in times of need, to give us encouragement that the On who made the universe in on our side and by our side always. “This Is What We Live For”, a bright poppy melody driven by guitars and synth, brings to the fore the ever true notion that our entire purpose in life is to make Jesus’ name known and famous, as Mike powerfully exclaims that what we live for is ‘…to  go where You say go, to  let the whole world know You’re the light in the darkness…to love the way You love, so God be lifted up, come be light in the darkness…’; whereas the pseudo-title track “Turn On The Light” delves into the importance of light and us being the light in a world of darkness. As we as Christians know Jesus, it is our responsibility for us to be the light of Jesus everywhere we go, especially in the places where God’s name isn’t welcome, and in the places where our faith is frowned upon. One might say that sharing the gospel in an area where we can be persecuted is foolish and that self-preservation ought to be what we strive for instead, yet it’s in times where we can only rely on our faith and on Jesus where we find out how true He is and how true our faith really is. As ambassadors for Jesus, He ought to be front and centre of our lives- and this track proves that spreading the gospel far and wide needs to be one of the main things in this life we should aim to undertake and undertake well!

The prayerful piano led 5 minute slow-tempo ballad “I Know” is next, and is a standout track in my opinion, as Mike eloquently relays to us that as believers, we need to know that whenever we are in times of trouble and strife, we only need to look to the Bible and the past to know that Jesus has delivered His people previously, and there’s no reason why He can’t do it again. As Mike emphatically declares that ‘…I know that You are good, I know that You are kind, I know that You are so much more than what I leave behind, I know that I am loved, I know that I am safe ’cause even in the fire to live is Christ, to die is gain…’, we are met with the assertion that even in the trials we can know of God’s goodness because He has said so. A simple track, yet oh so effective and emotional. While the reggae/Caribbean flavoured “What I’ve Got” and the Hillsong Worship or Passion-like worship melody “The Name Of Jesus” round out the first half of the album- with the former being a happy-go-lucky track where we can count our blessings because everything we have has been given to us by Jesus Himself; and the latter a standard worship fare melody, and one that will take off at churches everywhere in the future…it’s only a matter of time.

“I Want To Tell The World” is probably the only mis-step of the band on this record. It’s badly titled, and the electronic backdrop is slightly distracting- although Mike’s earnest delivery of the lyrics that He wants to tell the world of the hope that he’s found, of the Saviour who is Jesus Christ; is admirable at best…but then the ‘woahs’ like in and that’s sadly the final straw for me. Enough the press ‘skip’. Fortunately things are markedly better moving forward. “Pursuit” may be driven by synth and electronics, but where it deviates from the previous track is a clear indication of where it lyrically wants to go, as Mike passionately reiterates that he longs to pursue God as long as it takes Him to know more and more of Him. “Your Love Changes Everything” is another simple yet lyrically profound track, as biblical truth is abundant here in this potential modern hymn- and another track that is destined to soar in churches and in Sunday morning set-lists if given the chance. Perhaps at a Passion conference if Kristian Stanfill chooses to cover this; as Mike ardently relays to us that Jesus’ love changes everything, changes our entire trajectory of how we live the rest of our lives!

Trying their hand at disco/80’s synth/light rock; Big Daddy Weave deserve praise for stepping out of the box musically in “Walking In The Light Of Your Love”- and though the subject matter is cheesy and unoriginal (about how we can and will walk in the light of God’s love because of all He’s done for us!); musically this song is sublime and near-flawless, given that it’s not their genre. Album ender “Fly” is as emotional as an ender has been in recent years, as Big Daddy Weave once again change up the genre- this time trying their hand at country music (and succeeding!), with Mike beautifully reiterating the fact that one day He’ll be in heaven with Jesus, and that’s a fact worth celebrating. Yet for me the pinnacle of the album is the penultimate track “All Things New”. Thematically similar to Steven Curtis Chapman’s song of the same name, and co-written with David Leonard, Big Daddy Weave in my opinion have created a gem here, even if it is only with the keys; with Mike unequivocally proclaiming that it is Jesus who makes all things new, as He asks ‘…God of mercy and love, do what only You can do, and make all things new…’. Jesus is indeed the maker of all things and the restorer of all things, and once we fully understand this notion, we can live life more freely, as we give Jesus our everything and know that He can fix anything that is broken.

“…as the Lord used ‘Redeemed’ to touch Zach’s life, He is now using a song that Zach wrote, that so deeply speaks to where we are. This song came in its perfect timing, with us coming out of a hard life season and into a season of light. We cannot wait for everyone to hear a song that means so much to us as a band…” What more can I say about Big Daddy Weave’s When The Light Comes that I haven’t said already? I’ve already showered this album with plenty of praise maybe a bit more than necessary, so I’ll just say this. Go listen to the album pronto! You definitely won’t regret it, as it’s one of my favourite albums of the year (top 5), alongside albums from Newsboys (UNITED), Tenth Avenue North (No Shame), Skillet (Victorious) and Avril Lavigne (Head Above Water)- sorry Danny Gokey! Well done Mike and co., I can’t wait to hear what God has for you next in the future, and to hear about the effects of lives changed by “Alive” as well!

3 songs to listen to: Alive, I Know, All Things New