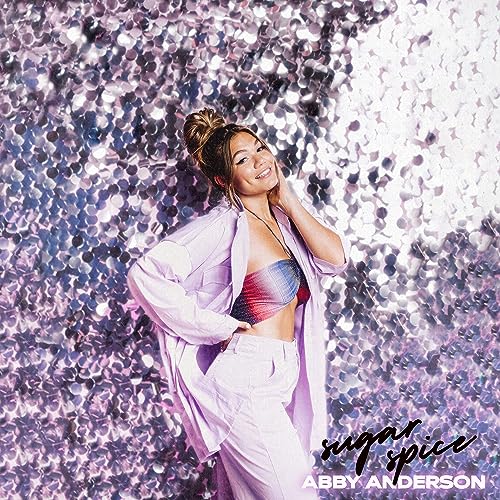 Abby Anderson, one of country music’s best kept secrets, is an artist that hadn’t been on my radar until this year. If you’ve read any of the posts on our site, you would know that both Jon and myself resonate heavily with country music. Yet for some reason Abby’s music slipped under the radar, so much so that we only found out about her music this year. One of the songs to touch my soul and spirit in a powerful way was “Fearless” from A Dog’s Journey. The piano ballad was a song that brought tears to my eyes, and as I listened to the song that YouTube recommended to me one day, the penny dropped that I was in the midst of listening to an artist who is set to become popular, inspiring, and influential within the coming months and years. Fast forward to now, and Abby recently released her debut full length album (of 9 tracks), called Sugar Spice. It’s a pop/country album, and doesn’t feature your traditional fiddles, banjos and other weird instruments like mandolins and steel guitars. However, Abby’s music is nonetheless poignant and moving; and with one listen, I’m sure you will agree with me.

I’m not saying that service [in religion] is a bad thing. Service is an amazing thing. But at least for some of the women in my life, it was service to a fault — in that I would see them not getting the things they needed or that they wanted. I found myself in a record deal, which is something that most young girls in town would kill for. But I found that little scared church girl coming out in the worst way. It felt like I was praised more when I listened quietly, the more I just did what everyone wanted me to do.

The day I walked out those doors for the last time, I felt it was the first time I really had ever spoken up for myself and followed through on a deep gut feeling I had. In the past, I would have these strong gut reactions, strong gut feelings, and just deny them and just cast them aside. That day, I just remember feeling so much peace — just this lightness and this love. And I remember sitting in my car bawling happy tears, because I just felt this overwhelming blanket of love pass through me, like, ‘Everything is OK.’

I used to hunch over to hide my chest because I would feel guilty if, God forbid, a man looks at ’em. Now I kind of go by the reasoning of, hey, let ’em look. [This new era], it was made possible by leaving my old beliefs — not just a church, not just a label. It was about breaking up with the story I had been telling myself.

With the story above being Abby’s ‘testimony’ of sorts, of leaving the Mormon church because it was too stifling, and instead going out on her own and creating the music that she has always wanted to; Sugar Spice isn’t like any other traditional country album I’ve heard. But it is emotional, honest, and personal- and that’s the only thing you’d want and actually hope for in an album, don’t you think? Album opener “Insecure” is a track directed to an ex, with Abby revealing that she doesn’t even miss him and that she’s not insecure anymore- in fact, she is thriving, and she wants her ex to know that. With the poignant mid-tempo guitar led ballad being a song that I’m sure everyone can relate to (the breakup of a relationship or a platonic friendship can be rough, but this melody speaks about breaking off a relationship that is toxic!); the song can also be about Abby leaving the Mormon faith or Abby leaving her label, or both. In times when we do have to leave toxic things that don’t build us up, we need to know that we are worthy, and we are valued apart from that thing we thought defined us- and Abby beautifully encapsulates this thought in the song.

The rest of the album reminds us all, that even though we are our own worst critic; we should still live life to the fullest regardless of our situations- because we are special and beautiful and valuable to society because we exist. “Be That Girl” is a reflective, piano led melody about Abby though the persona declaring to a future spouse (even though Abby herself is married!) that she can be that girl for the guy- the good girl who ticks all of his boxes. I don’t know if the song is satirical or genuine; however, the melody reveals that there are good people and good potential partners out there for us all to connect with, but we just need to know where to look. “Juicy”, a sassy, poppy, bouncy and incredibly infectious and empowering dance/pop song, celebrates the concept of the full body figure, and also celebrates every kind of body- no mater what they look like; while Abby once again delivers lyrically on the pinnacle of the album in the revealing and authentic “Bad Posture”.

The lead single for this project; Abby enthusiastically, carefully, and honestly sings about her past life in her previous record label and as a Mormon- Abby sings about having ‘bad posture’ and ‘shrinking herself’ in every way to make other people feel and seem taller. “Bad Posture” reveals a heartbreaking yet hopeful anthem about reclaiming your voice and discovering the special you that you were meant to be. “Even The Stars”, a breezy, poppy piano led melody, is a lamentation of sorts lyrically; with Abby singing about her first love and first heartbreak since leaving the Mormon church- outlining that the first heartbreak for all of us may feel like the end of the world, but really, it’s a part of life. The title track, a fun, happy-go-lucky pop melody, speaks about Abby wanting her lover to please her physically (a track that lyrically is quite possibly the weakest), while “The Only Problem Is” details Abby running into an ex (who wasn’t good for her emotionally), and falling back into bad habits of casually hooking up with them. It’s a sentiment that is prevalent in many people today; and so, this track speaks to the core of us, and subtly encourages us all to never put ourselves in a situation where we can be tempted by one of our vices.

“Where Did All The Cowboys Go”, a piano led, emotional and honest ballad, speaks about Abby lamenting about chivalrous men and wondering where all of the people with good manners are. It may be a song sung in frustration and exasperation at the world today; however, there is some truth in this track- these days people are all consumed with themselves and their phones and with technology, and Abby is encouraging us all to think more about our friends and family instead. Sugar Spice then ends with probably the most vulnerable song on the album. The ballad “The Song” speaks about Abby’s unanswered questions, doubts, prayers and hopes for the future. The song is structured in a way that it could be seen as a prayer of sorts- but given Abby’s tenuous and fractured relationship with the Mormon church and any religion for that matter; I reckon this song is just her musings, and a reminder that people are complex, and people have questions. As a Christian, I personally know that Jesus has all of the answers. But for those who aren’t believers in Jesus, this song provides some hope and comfort that there are people out there questioning their entire belief structure. This song may lead people to Jesus, or it may not. But Abby’s song nonetheless provides discussion and healthy discourse; and for that she should be proud and congratulated.

I got to choose all the songs and I love every single one of them. It just feels like me. There are no boxes or anyone else I have to answer besides myself. I’ve never even gotten to play piano on my own records before. Getting to play all the parts and come up with the arrangements for my forthcoming record and write all the songs felt like I was actually telling my story. I don’t think there’s any two songs or three songs that sound anything like each other. Yet, it all feels the same in that it’s me. Hopefully you can hear this and just hear the joy of my voice.

Abby Anderson isn’t the most recognisable country star. But this album should garner buzz and hopefully positive reviews. It’s not the greatest lyrically nor musically. However, Abby has toiled hard, and these songs are a reflection of everything she has been through. This project is special to Abby, and it is quite solid to say the least. Sugar Spice won’t set the world on fire. But it may stir someone’s soul. And who knows, through the album ender, someone may turn to Jesus. Wouldn’t that be something? Well done Abby, I can’t wait to hear what is next in store for you!

3 songs to listen to: Bad Posture, Even The Stars, The Song